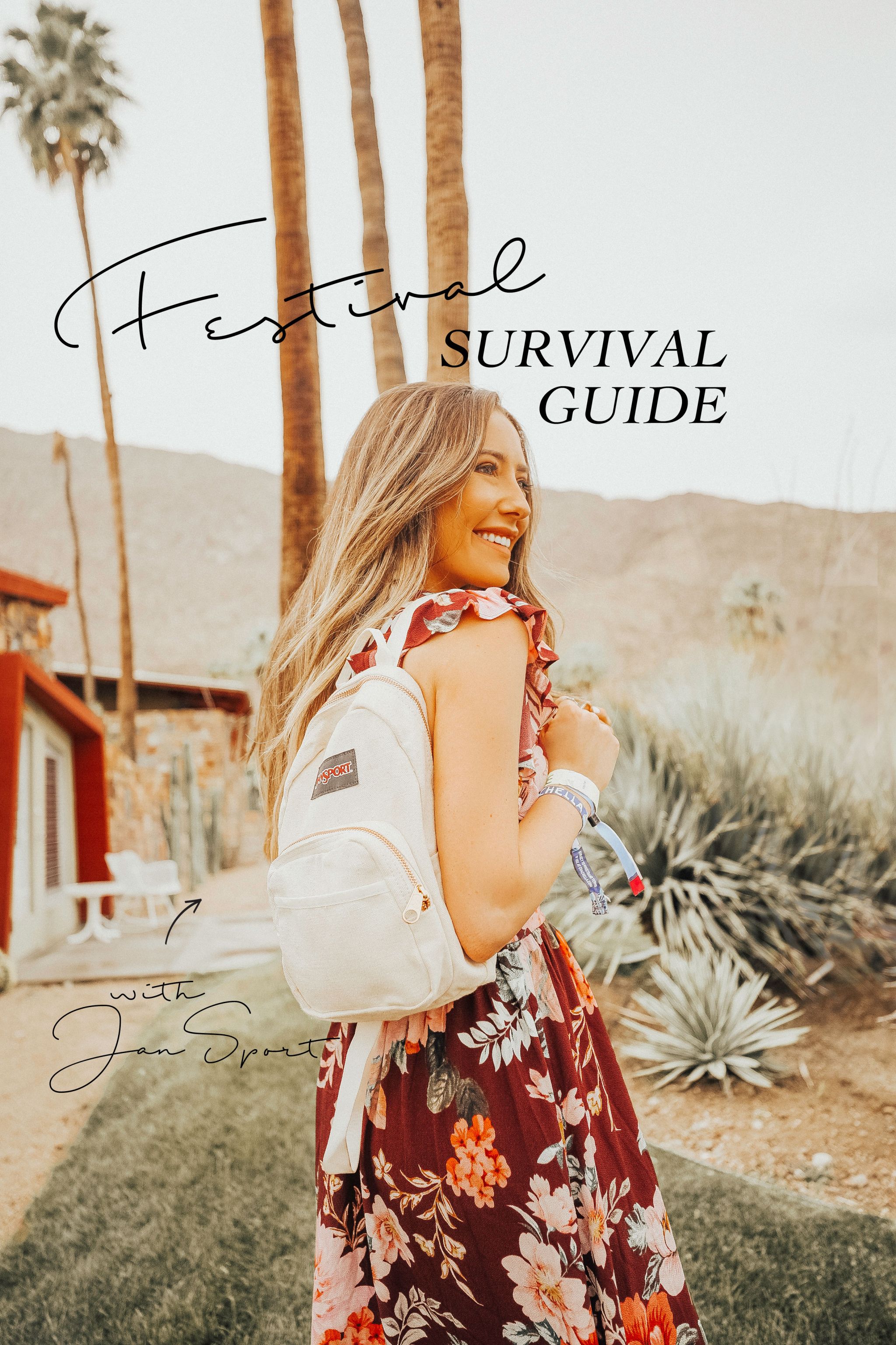 Festival season is among us once again; arguably one of the most magical times of the year! Well, that is if you’re prepared and know exactly what to bring and what you should never even think about bringing. If you’ve never been to a festival before, you’re probably panicking, over-packing, and forgetting the absolute essentials! Don’t you worry babe, I got you! Everything you need to know to have the best weekend ever is in this post, so let’s dive right in!

THE ONLY FESTIVAL BAG YOU NEED

Festivals can be the dreamiest experience, but it’s still going to take a lot out of you by day 3, which is why it’s crucial that you’re well-prepared! The best purchase you will make (if you don’t have one already) is a small-medium sized backpack. This year, I got to experience this unforgettable weekend all thanks to JanSport, a brand that I have admired and worn since I was five years old!

JanSport launched their very own festival collection, which is equally practical as it is trendy and fun. Each pack is the perfect size to fit my essentials (which I’ll get into!) and comes in a variety of solids and patterns to fit your personal style! You guys know I love me some neutrals, but the Indigo or Floral patterns are so cute too! 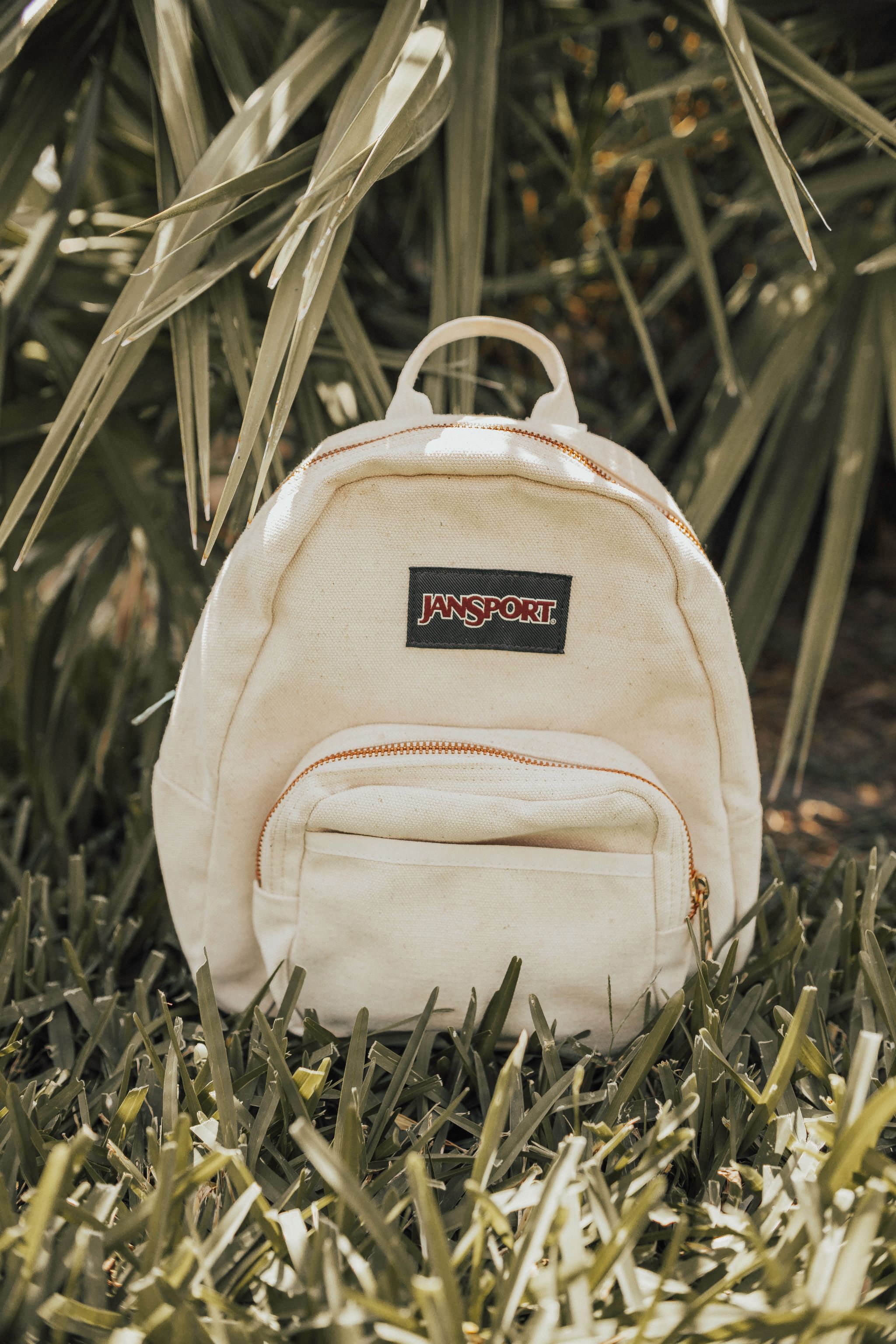 Take it from me, the smaller the backpack the better. My first year at the festival was pretty much a trial-run in every aspect, and while I was so glad I had a backpack with me (versus a purse or nothing at all) it was way too big for the limited items I needed with me. Trust me, when you’re dancing around or running from set to set, the last thing you want is an unnecessarily large bag to lug around all day.

In short, don’t fill your pack with mindless items, but do be prepared for the unexpected mishaps that are bound to happen to you or your friend! 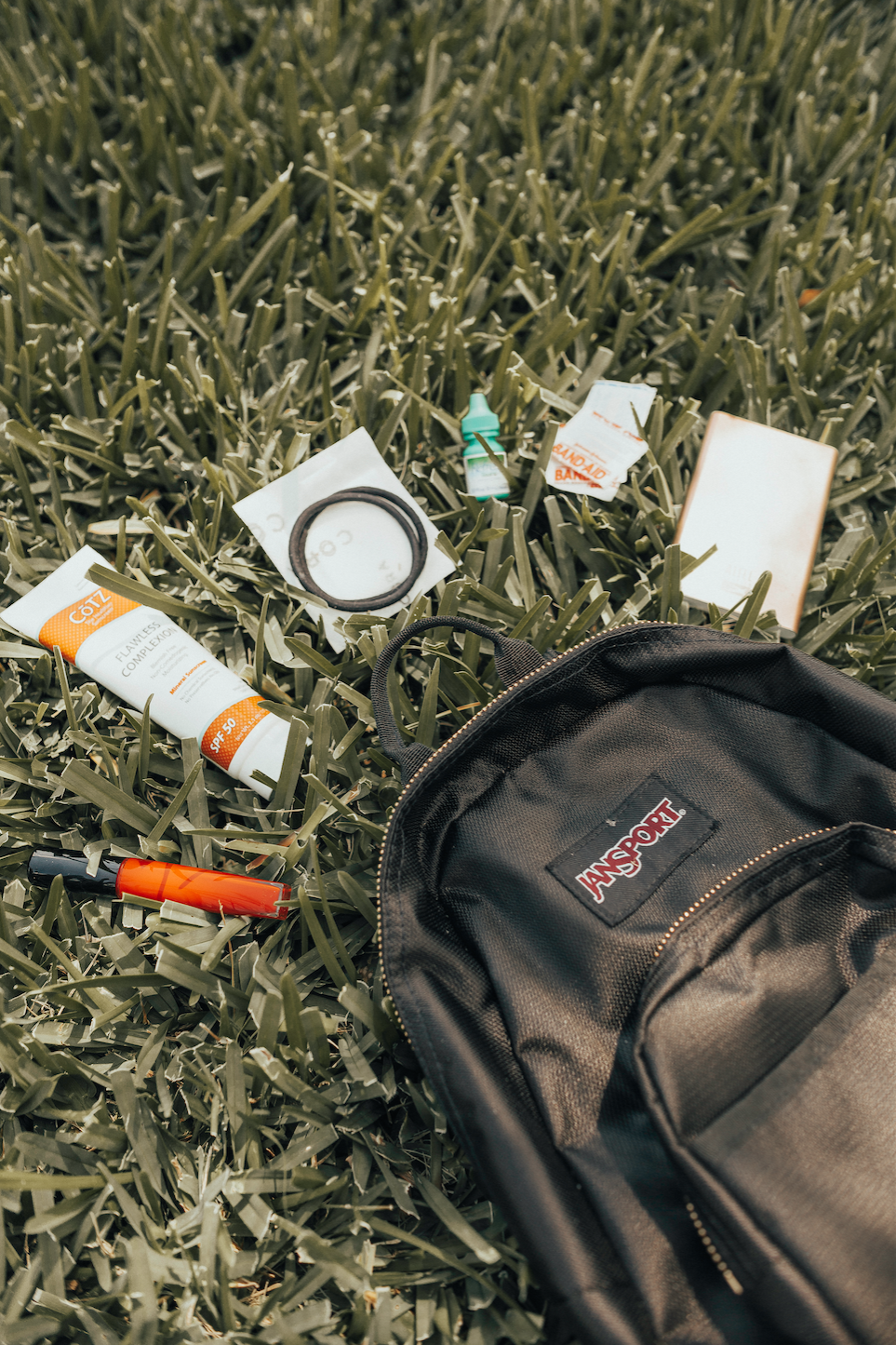 -Portable Chargers – 2-3 small ones or 1 that holds a long charge! The cell service isn’t promising, and you never know if you’ll need to make an emergency call or ride! I love this one and this one.

-Hat/Sunglasses – These were the only pair I wore all weekend!

-Bandana – This festival is literally in the middle of a desert, and the dust can get insane. You may have seen photos of people wearing these around their necks and thought they were solely a fashion statement, but they’re actually to prevent so much dust/dirt from filling up your nose and mouth when you walk around!

-Period Products – Self explanatory, but the last place you want to be when mother nature strikes is the middle of a desert with nothing but port-a-potties. Even if you’re not expecting it, pack some extra goods and help a sista out!

-Zipper Pouch – It’s also a great idea to keep a smaller zip pouch inside your backpack for smaller items you really do not want to lose, such as your ID, credit card, and shuttle pass. JanSport makes these accessory pouches, which are perfect for organizing your portable chargers/cords too! It will also be so much easier to navigate to what you need when you’re buying food or drinks, and will lower your chances of having one of your cards fall out when you’re rummaging through your bag.

-Walkie Talkies – Okay I’ve never done this, but so many people do! If your group gets separated, one of you probably won’t have service to call each other, so this is a great old school option to connect and regroup! These ones look great and are pretty inexpensive, plus they’re just fun AF am I right?!

-Small/Polaroid Camera – Even if you’re not a blogger/vlogger, it’s still a great idea to bring a small camera to document this exciting weekend, especially if you want to save your phone battery! I also brought my FujiFilm instant camera which was also so fun to capture some memories, and it doesn’t weigh too much!

-Light Blanket – More on that below!

The festival’s website should have a comprehensive list of what you can and cannot bring, so definitely check that out so you don’t get turned away or have your things get taken! Here are a few key items to skip out on:

-Aerosols – Anything that comes in an aerosol can, including spray sunscreen, is a no-go.

-Big Cameras – Unless you have a media pass, you won’t be allowed in with any camera that has an interchangeable lens capability. Stick to your phone or small camera only! 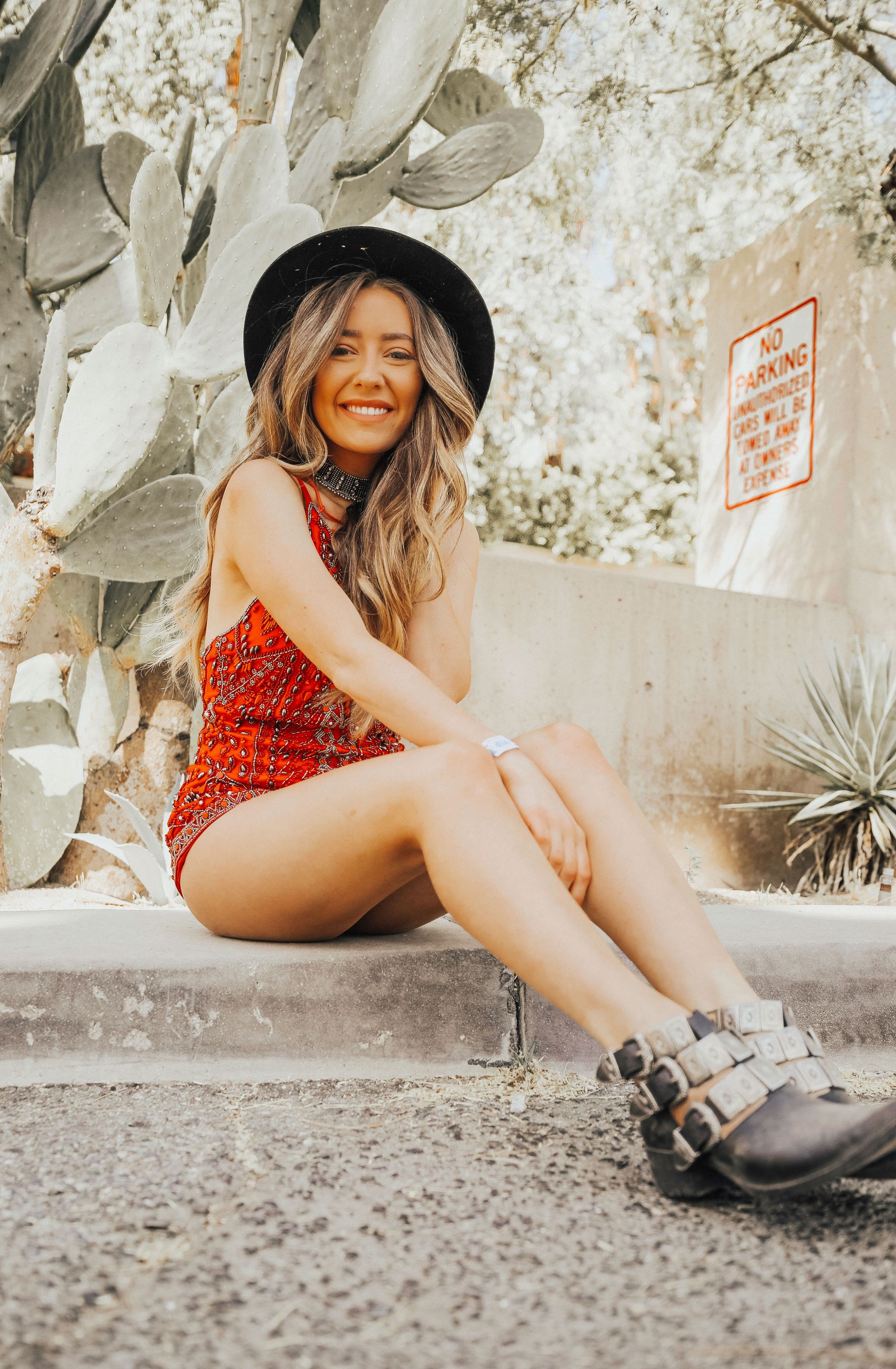 One of my favorite aspects of the festival, aside from the killer line-up, is the unapologetic fashion that is all around you. It’s so freeing to show up in whatever the hell you want, no matter how “crazy” it may be deemed in any other scenario. You could wear the most over-the-top outfit, or hardly anything at all, and no one will judge you for it. There are really no rules on what you can and cannot wear, but here’s my advice no matter what:

–Always bring at least 2-3 comfortable shoes! Even the most comfortable shoes will likely make your feet hurt in one way or another by the end of a long day on your feet, and you’re going to be miserable if you don’t have other options! Each day I end up having to wear different booties because I’ve developed blisters (or near-blisters) that cause me to physically not be able to slip on the same shoes without pain! Even though it’s annoying to have to squeeze so many shoes in your suitcase, I promise you it’s a necessity! Going along with that…

-Don’t wear brand new shoes. If you do buy new shoes for the festival, walk around in them for at least a solid week beforehand so they’re well broken in!

-Don’t wear white, unless you don’t care that they’ll get destroyed.

-Also don’t wear any open-toed shoes! I see so many girls do this on day 1 because they think it will be comfier, but you are setting yourself up to get non-stop stepped on. Ow.

-Oh, the age old debate! No I’m totally kidding, but I wrestle with this dilemma every year. It’s really hot during the day, so any type of jacket sounds like hell. But then it usually gets chilly at night, so you’re left wishing you had packed that jacket after all. To meet in the middle, I started packing this light circle beach blanket that not only can I use during the day to sit on, but I can also throw around my shoulders when the brisk air rolls around! It doesn’t take up much space/weight in my bag, so it’s been working out great for me! Although if you typically stroll into the festival during the late evening, then you’ll probably be fine with a light jacket.

WHEN TO SHOW UP TO THE FESTIVAL / DAY PARTIES? 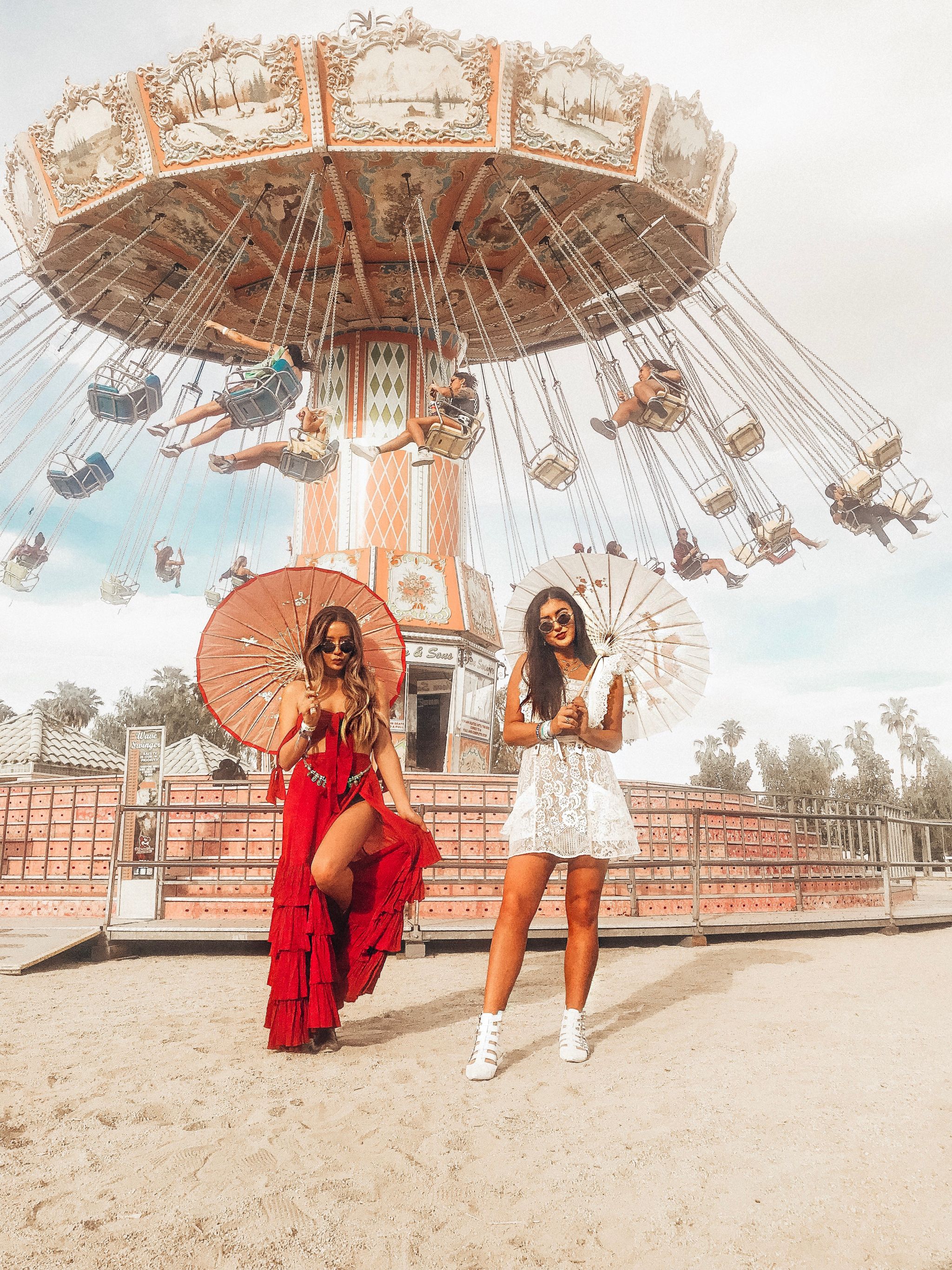 When it comes to the festival, the show times aren’t released until the week of. Be on the lookout so you and your group can create a game plan of what shows you want to hit up and when. Gates open at 11, but typically the more mainstream, “bigger” artists, will be later in the night, with the headliner closing out the night (think Beyoncé or Eminem…still NOT OVER THESE SETS)!

I would say most people don’t roll in until 4-5pm at night, because a 12-hour day in the hot festival is a lot. But honestly, do you! You’re paying a lot for these tickets, so make sure you’re getting your money’s worth by seeing as many sets you want to see!

If you do decide to hit up the festival in the late afternoon, you may be wondering what else there is to do during the day! I swear, every year there are more and more day parties and after parties going on, it’s insane! A lot of brands will host pool parties during the day, which is a fun way to relax and cool off so you don’t exhaust yourself on day one. You can sign up to get on these lists once festival season rolls around!

If you were overwhelmed with where to start on your exciting festival trip ahead, I hope you now feel more prepared! No matter what, don’t forget to check out JanSport’s festival collection and pick up some packs, whether you’re hitting up a festival, hiking, or traveling soon! This half-pint style pack and this convertible style backpack are my faves, but you really can’t go wrong!

Disclosure: JanSport provided my travel, product, and accommodations to attend & cover the event.